for the latest edTech news, free resources and competitions!

Thank you for subscribing

Watching the players receive their medals on the main stage at Bett 2020 and with £15,000 now raised for Mind, it’s hard to believe that the #EduFootyAid initiative is only 15-months old. Until now, fixtures have all taken place in primary schools, and it was a big step-up from bobbly playgrounds to the Excel Arena.

A pre-eminent venue demands a special event and that’s why, although time was against us, we put together an audacious plan to bring two firsts to Bett. Our first multi-region men's tournament and our headline match, the first ever #EduFootyAid women's game. It took a gigantean effort of organisation from the teams at Bett and 2Simple, plus the generous support of our sponsors. But it was all worth it and by the morning of Saturday January 25th we had erected two pitches inside the Excel, and eight teams were making their way from across the country, for the chance to be crowned #EduFootyAid champions. 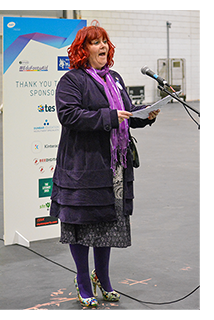 Rachel Orr is a trained opera singer and former headteacher who is quite frankly, ORRsome. She sang at the very first #EduFootyAid and as soon as the event at Bett had been agreed we knew we had to get her there for the opening ceremony. Living in the North East, Rachel left her house before dawn to make the six-hour journey to London. If she was tired it didn’t show, she looked every-bit the prima donna, and as soon as she began to sing the national anthem the air became electrified. Spurred by the majesty of Rachel’s voice, the players, who had been shuffling nervously on the halfway line, stood tall and proud, and it became clear... it was game on!

The men’s tournament got underway with Midlands vs North East and London vs North West. Boasting a team that included retired Premier League midfielder Sam Aiston, plus several former semi-professionals, the Midlands were hotly tipped to take home the trophy. But the North East had other ideas. In what was arguably the game of the day the two teams went blow for blow in a fast and physical game. The goals, which were kindly sponsored by BeeDigital Ltd, saw non-stop action with the score finally settled at four all. 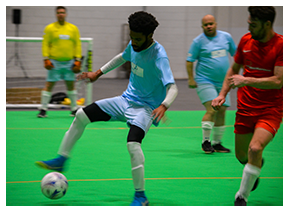 On the other pitch, London, who had failed to find form in their only previous #EduFootyAid fixture got off to a flying start, brushing aside a North West team who looked sleepy at kick-off, but had been very much shaken awake by the final whistle. The game ended 3-1 to London.

Next up was the South East vs North East on pitch one and London vs 2Simple on pitch two. Invoking images of South Africa’s 1995 Invictus team, the North East really had given it everything in their first match and it showed in their game against the South. They played some nice football but simply didn’t have the energy to keep up with the frenetic tempo that small 5-a-side pitches inevitably create. South East keeper and Captain, Graham Andre, was called into action on several occasions but ultimately, they cruised to a comfortable 4-2 victory. 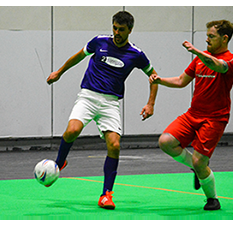 If there was one damp squib it was our own 2Simple team. On paper they looked a good side which included International Sales Manager Luke James, who played along-side Gareth Bale at the Saints academy. But the team failed to gel and looked to be surprised by the quality of the opposition. Failing to net in their first game the 2Simple team were dismissed 2-0 by London, who secured their place in the final.

2Simple’s second game against the North West saw them find the net for the first time thanks to former PE Coordinator, current Sales Rep, Gareth Griffith. Unfortunately, their gains up-top were nullified by a worsening at the back that saw them concede four. Although the finals were out of reach, this victory secured a place in the third-place play-off for the North West.

The final group game on pitch one was between the Midlands and the South East. The Midlands looked to have been given the hair-dryer treatment by skipper Lee James and the team started with what you might optimistically refer to as ‘gusto’. The South East defended with Spartan courage against a perennial onslaught from the Midlands. Special mention goes to the South East’s Jordan Day who picked up the day’s only injury, after a midfield entanglement sent him crashing to the ground. The Midlands saw out the game comfortably winning 4-1 and booking themselves a place in the final. 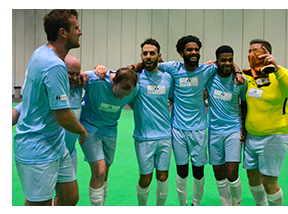 It’s fair to say that both teams were fired up for the final and referee Dave Smith had to be on high alert. The sin bin was in operation throughout the tournament and the way both teams were playing it seemed inevitable that someone was going to be sent to the naughty-step for the mandated five. In the end, it was the Midlands who found themselves a man down and London were quick to capitalise. Until that point the game and been a cagey nil-nil but by the time the vanquished player returned London were 3-0 up. The Midlands looked to rally but too much damage had already been done and the game ended 4-1 to London.

London, technically the home team, were sponsored by Dunbar Education Recruitment and captained by company Director Matt Brown who netted four goals during the tournament, including two in the final. Beyond the customary sweaty hugs and high-fives, Matt gave the celebrations extra meaning by adding an additional £250 donation to Mind to mark his team’s victory.

In the third-place play-off it was a bittersweet 5-1 victory for the North West. Sweet, because they had finally found their form and were linking up beautifully to score real team goals. Bitter, because if they had started the tournament faster, they might well have found themselves atop the podium.

With the men’s tournament over it was time for our headline match, the first women’s game. Although, it’s important to note this wasn’t the first-time women had played in an #EduFootyAid match, as several, including captain Casey Lynchey had made appearances in mixed gender fixtures. But this was the first time two all-female teams had taken the field. 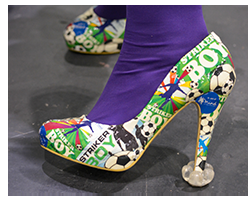 The occasion was marked by a short address from Bett Event Director, Eve Taylor, before Rachel Orr once again took centre stage. This time she sang Nessun Dorma, the song made synonymous with football by Paverotti at Italia 90. Rachel didn’t fill his shoes, instead she had her own custom Striker Boy Campaign heels to wear, and they unquestionably had more flare than any of Luciano’s former footwear. Her voice was also more than a match for the maestro, and she held the crowd enthralled until the final note, which was met with thunderous applause.

The teams played in the Mind colours of blue and white with both kits generously provided by the TES. And there was no shortage of quality on the pitch with over half of the 12 players also playing club football, including both opposing keepers who are normally squad mates at Clapton CFC. From the first whistle the game was played at a very high tempo, and not an inch of ground was conceded by either team without contest. 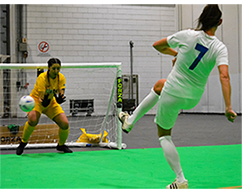 Special mention goes to Fran Gamble who possess’ a right-foot so dangerous she risks being invaded by a coalition of Bush and Blair, and she used it with pin-point accuracy to give the White’s an early lead. That lead was cancelled out by the Blue’s Hollie Watson before being restored again by Fran who bagged a second. It looked like the White’s would see out the win, but Stevenage FC’s Chloe Lupo-Gunn netted late in the game to level the score at 2-2.

It remained level until the final whistle and the game would have to be decided by the fans favourite and the players nightmare... penalties. The shoot-out was as tight as the game, but the Blues eventually won 4-3, snatching victory by the narrowest of margins. 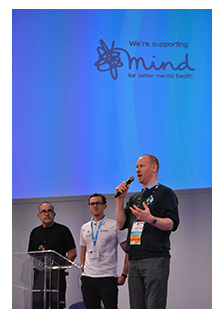 With the football now over, all the players from both tournaments made their way to the Bett arena main stage for the medal and trophy presentations, which were generously provided by Matrix Sports. #EduFootyAid co-founder Martin Bailey conducted the ceremony alongside referee Dave Smith and 2Simple Wellbeing Manger Sam de Lange. Blue’s captain Hayley Wood-Thompson and London captain Matt Brown led their teams onstage to receive their respective trophies and were then joined by all the teams for medals and photos!

Accompanying the expected feeling of celebration there was a real sense of community, as players, many of whom had only met that morning, now stood arm-in-arm gleefully posing for photos. The future of #EduFootyAid at Bett was uncertain as like a young untested prospect we’d only been signed for a one-season deal. But the Bett organisers were so enamoured by the passion of our players that they signed up for 2021 on the spot. It was a fairy-tale ending to what had been a truly magical day, and they only thing left to do was head to the pub for a well-earned drink. With Kinteract kindly footing the bill the conversations and drinks flowed freely, and it was lovely to see all the teams now mingling together. 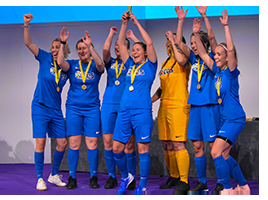 There is one team who deserves the final word – Mind. They work tirelessly to ensure that people from all professions who are experiencing mental health problems receive the support and respect they deserve. Together with Bett and our players this event raised £5,300 for Mind, taking the total raised through #EduFootyAid to over £15,000. We would like to give special mention to the following players for their exceptional fundraising efforts: Casey Lynchey from Holcombe Brook Primary School, Jordan Day from Madingford Primary School, Matthew Brooker from Oakfield Primary Academy.

If you need advice or information about mental health you can contact the Mind info-line on 0300 123 3393.

View all the pictures from the day on our Facebook page.

We'd like to thank our sponsors The Bett show, The Education Show, The Tes, MX Sports, Kinteract, Dunbar Education, Striver and BeeDigital. Without their support this event wouldn't have been possible. If you are company and would like to help support #EduFootyAid please email hello@2simple.com.