for the latest edTech news, free resources and competitions!

Thank you for subscribing

The 12th June would have been Anne Frank’s 93rd birthday had she not died at the age of 15 in Bergen-Belsen concentration camp. To support with planning on how to mark the anniversary with Year 6 pupils, teachers can download this free resource to see how it can be used to support pupils as they prepare to transition to secondary schools. Subjects that are included in the resource that may be useful at this time of the year are addressing pupils' concerns moving to a different school, how friendships will change and differences between the primary and secondary school environment.

Within the pack there is also an activity encouraging pupils to develop a personal manifesto for Year 7. Share completed work with us by tweeting @2SimpleSoftware and use the hashtag #2SimpleTransition to be in with the chance of winning book or stationary vouchers. 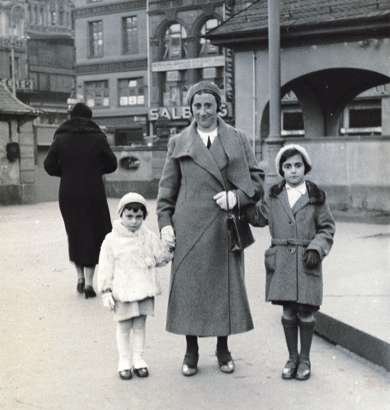 Anne in Frankfurt with her mother and older sister Margot

More about the resource:

Although the topic of the Second World War has been removed from KS2, many teachers include a study of Anne Frank and her diary in Year 6. Developed in collaboration with Gillian Walnes Perry MBE, Co-founder and Vice President of the Anne Frank Trust UK, this resource explores how the life of Anne Frank can be used to support pupils as they prepare to move to secondary school. By getting to know Anne’s likes, dislikes, feelings, and emotions, teachers can discuss challenging topics such as the fear of others, the difference between public and private writing, relationships with family, and concerns over moving school and making new friends.

The resource pieces together quotes from Anne’s diary and her short stories with historical information about her life before the war, her relationship with her parents and sibling, her fears about the war and her attitude to school and learning. It helps create a clearer picture of the girl behind the diary. By allowing pupils to see Anne as a more rounded person our hope is that they can start to empathise with how she would have been feeling when she was writing her diary and thus begin to explore how the topics covered can be compared to their own lives.

Anne Frank was born in Germany on the 12 June 1929. Together with her family, she fled to Amsterdam in 1934, after the Nazi party had come to power and brought in restrictions against the Jews. After a happy six years growing up in freedom, the Nazis invaded the Frank family’s new home country, bringing in similar laws to those that the family sought to escape when they left Germany. As the situation continued to worsen, with Jewish men being arrested and sent to concentration camps, Anne’s father Otto began to think about how he could keep his family safe. By the spring of 1942 he had decided to create a hiding place in an empty part of his business premises. He also asked his most trusted employees to take care of his family. Anne and her family went into hiding in July 1942, the day after her older sister Margot received a letter requesting her to report for deportation to a work camp.

Just one month prior to going into hiding Anne had celebrated her 13th birthday. One of the gifts she received from her parents was a checked fabric notebook that would become her personal diary. During the two years Anne and her family were living in secret in their hiding place she chronicled her daily routine, expressing her feelings about her friends, family and the other four people in hiding together, with her fears about the war and her hopes for the future. The eight residents of the secret annexe were together for just over two years before they were all betrayed in August 1944 and sent to Auschwitz in Poland. Anne and her sister Margot died of starvation and disease in Bergen Belsen camp in the spring of 1945, not long before the camp’s liberation. Anne’s father was the only member of her family to survive the war and on his return to the Netherlands was given his daughter’s diary, which had been kept safe by Miep Gies, one of Otto’s trusted employees who had helped protect them. Despite being aware of his daughter’s wish to become a published author, Otto was unsure about publishing the diary, but after sharing it with friends whose opinions he valued, the consensus was that everyone should read it as a way of understanding what had been lost in the Holocaust. In June 1947, two years after her death, Anne’s diary was published. It has since been translated into over 70 languages, and made into several film and TV interpretations.